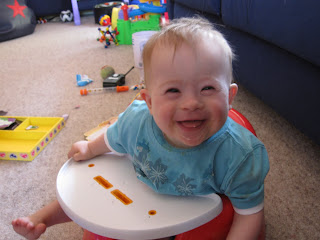 This is Luke having Christmas lunch in his new seat Nana gave him. I love it as the tray is just the right height for him- in his high chair he can hardly see the tray because it is so high. It is also helping him with his sitting- not Luke's forte because he likes to be on the move. He loves it! 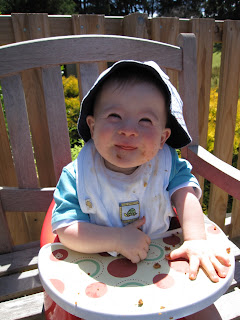 The parts for Emily's bike were delivered to Nana in Christchurch, and arrived here at 10.30pm on Christmas Eve, just in the nick of time! A terrible photo of Em, but you get the drift :) 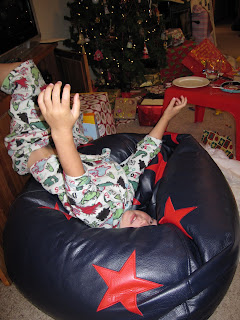 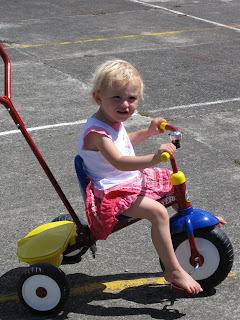 So all in all a very Merry Christmas!

I have just been trying to sort out a near disaster. We have got Emily a trike for Xmas, and being organised, Neil got it out to assemble it last night. Bit hard with no nuts and bolts in the box, and it had no bell. Have been madly trying to get Toy Planet to send us the pieces, but a bit hard this late, and being so rural. Plus the lady on the phone has to get the boss to OK sending us the bolts from another one, and he is out! Useless.

She assured me that I am the only person who has had this problem. Do I feel any better? No I do not. There is not much solace to be found in the fact that my daughter is the only two year old who is going to be getting trike components for Xmas. She is good at puzzles but not that good! Imagine: "Here you are Emily. This makes a lovely tricycle. See if you can put it together now. There's a clever girl. There's a trick to it!" Ridiculous.

Worst comes to worst I will send Neil to the bike and hardware stores for new bits, and bill them. Who needs the stress?!
Posted by Mel at 3:58 PM 1 comment: Links to this post 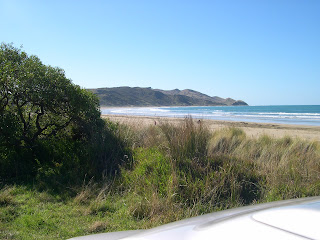 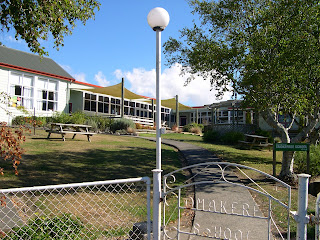 Well, the last official day for Neil as principal of Omakere School, and Ben's last day as a pupil there has been and gone. It is quite bittersweet for us, because Omakere has been a great place to be, especially for Ben and Neil, and we have met lots of amazing people. I will miss my friends, especially Anna, and Ben really doesn't want to go. He has already told me that he will be shy at the new school and hide behind my leg, and when the kids ask what he is doing, I am to say "He's just feeling a little bit shy right now'! So I have learned my script and we will see how long this shyness lasts. Ben is a pretty outgoing character, and he has lived at a school for the past 18 months, so I don't see him being shy for too long!

For those of you who don't know, Luke is the reason for our move. The Early Intervention available in this region is fairly basic- he saw the VNT twice in his first 5 months, and although he has now been seeing her monthly, this is not optimal. She has been great, with lots of good suggestions, but it is something I worry about a lot, especially as all the research points to Early Intervention having amazing outcomes for kids with DS.

So we looked at a couple of options- one being returning to Palmerston North. That would have been relatively easy, with our house there and all our friends for support. But the services there are very similar to what is available here, and seem quite fragmented. There is a great group started by parents, ABCD, which provides some extra intervention, and I have driven the kids there once a month for that too.

The best option was the Champion Centre in Christchurch. We have got a place there for Luke next year. We (Luke, Emily and I) will go in every Friday for therapy, and it is done in a fairly holistic manner, with the VNT, Early Intervention teacher and speech language therapist all in the same room. Plus with Mum in Christchurch it is the best option by far. She has been wanting to get her ands on the kids for years!

We leave on the 8th of January. Only 3 weeks to go. Hopefully they will be 3 lovely hot Central Hawkes Bay weeks, because I couldn't appreciate last summer as I was so pregnant and uncomfortable.

I am looking forward to our lovely new house in Ashburton- won't miss this one too much. But I will definitely miss Omakere, being up at the school and the Playcentre, and all our new friends. 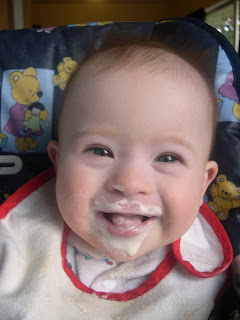 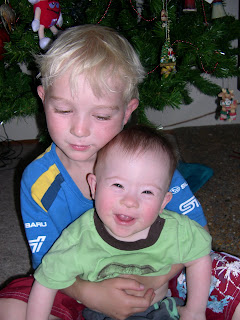 We have had a letter from the paediatrician this week, referring Luke to the Champion Centre down south, and it includes the results of his latest blood tests. So here goes:

So all in all, things are good. Yay Luke!

I have been attempting to give Luke a bottle a couple of times a week for the past several weeks, just to have the option of leaving him with someone else from time to time. He had been very reluctant, and the most I have been able to do is to get him to chew on the teat. He gets a tiny bit of milk in his mouth, and lets most of it dribble down his chin. Hopeless!

Yesterday I had an appointment, and so left Em and Luke with Gail. I left his food, a water cup, and the bottle, thinking he would be more likely to try from someone else.

While I was away, Luke had decided to guzzle not one but two bottles- and looked as though he had been on the bottle his whole life! Little monkey!
Posted by Mel at 2:39 PM 1 comment: Links to this post 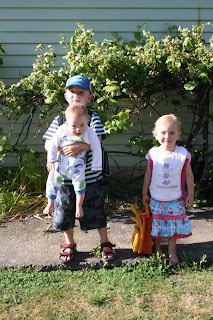 Ben started school last Monday- 3 1/2 weeks early. You can do things like that when your father's the principal!

He has been counting down the days for months now, and was so excited he was ready to go at about 7am. After the manditory photo call, he picked Em up, looked her in the eye and said "See you later Em. I'm gonna miss ya." Then blowing kisses over his shoulder, he walked across the driveway to school. So very cute and suddenly so very grown up.

The only near hitch was when his deeply uncool mother attempted to put both bags straps over his shoulders. "I just have one strap mum, like the big kids. I'm a big school boy now."