It has been a long and cold winter, and we have had to spend lots of time inside as it has been much wetter than usual. There have been lots of new games to teach Luke, and he is literally fought over- both of the big kids want him to play with them, and definitely not the other. So Luke has been trained as a Knight's Apprentice... 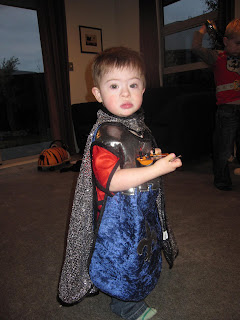 ...if you look carefully you can see the knight attacking his sister with a sword in the background. Her crime was to suggest she could join in, being a princess with fairy wings. But this castle has no room for princesses, apparently.
Here he is with proof that males can multi-task. (If drumming on the dog's water bowl and throwing her a ball count...) We are in the process of getting a whole new houseful of carpet due to that dog. I felt sorry for her on the coldest night of the year and let her stay inside, even though her kennel is insulated and she has an electric blanket. She repaid me by vomiting on the carpet in 3 places, which burned the colour of her dinner into the wool. Lovely. I am REALLY looking forward to having everything ready to be moved out to get the new carpet in. Should be hardly any work at all.
Neil spend this afternoon putting deadbolts on the doors. Luke can now (well he could until the dead bolts were attached) unlock and open the sliding doors onto the lawn and sneak out. He doesn't care if it is wet or cold or muddy. He just wants out! He's an outside kind of boy. 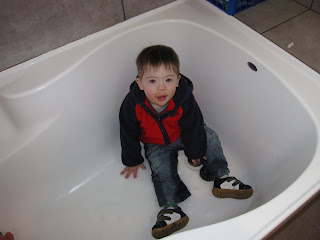 He's also a climb into the bath and turn the tap on kind of boy. Clothes are no impediment. The problem is that the big kids need to access the bathroom to wash their hands etc, and the only way to keep him out is to lock it from the outside. 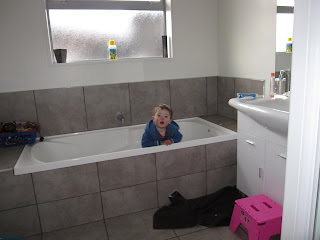 This does not make him mummy's favourite!

Luke has also given up his day sleep. He has lasted longer than any of the others, who have waited until their mother was very pregnant with the next baby and DESPERATE for a rest during the day to stop having theirs. Luke does not have this excuse, so he has waited a little longer, but now only sleeps if he falls asleep on the way home from Em's kindy or Ben's school. Or if he has been worn out fighting in the crusades and falls asleep in the arms of a beautiful maiden ;) 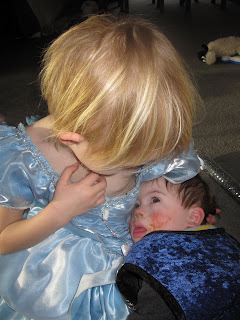 She's such a mother hen. 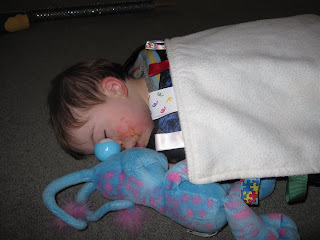 She even tucked him in and gave him a toy. 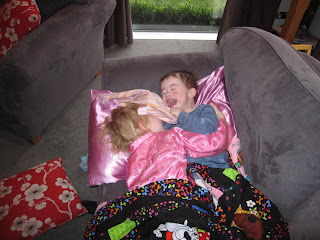 More hijinks on the couch 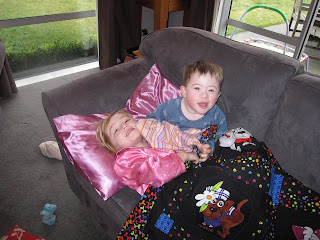 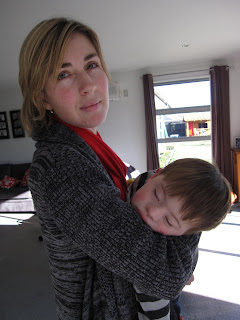 Worn out again. I can't even move him into bed once he's out any more, he just wakes up. 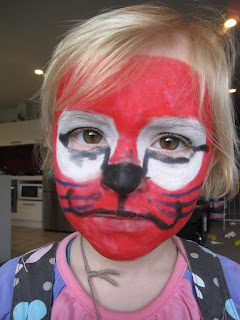 Em wanted her face painted as a red cat. She loved it, but couldn't understand why Luke cried and hid whenever he saw her! 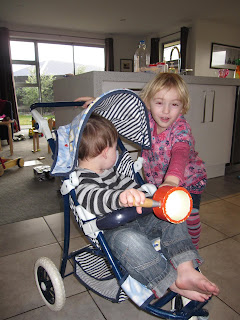 Who wants to push a doll around when you have a living one?
We are off for repeat bloods this week. The last ones were a bit iffy, so hopefully things have come right. Luke's thyroid was hyperactive, which is not often seen in children with DS and the opposite of the sub-clinical hypo-thyroidism he had nearly 2 years ago. Since then his thyroid has been fine. And the some of the coeliacs markers were quite high. I am hoping those have come down- I know there are many worse things that could happen, but I could still so without it. At least there is no gluten in sand!...
Posted by Mel at 8:09 PM 4 comments: Links to this post