Lightsabers at the ready!

I can't believe we are only in the third week of this school term- we're so busy again it seems like we never had a break. Luke and I have started going to Playcentre again recently. For those of you who are not Kiwis, Playcentre is a New Zealand Early Childhood Education centre, which is run by parents. There is a trained supervisor, and the parents also do training and have turns being "Parent helpers", organising activities and the like. Luke loves it and it's a great way to let him do lots of painting and messy play without having to be super mum and getting it all out at home.

But...because there are always parents doing training, there are always parents doing observations on children for their courses. So when I filled in Luke's forms last Friday, I put that I don't want him being observed for training purposes without my prior consent. When I told Neil this, he looked at me as if I was mad. After all, I am a teacher, and I know it's not a big deal. Except when it is. As I told him, there will be a component in some of those courses which focuses on teaching children with special needs. There will be others who think it will be good to choose him because he stands out a little. So I could end up having him observed far more than his fair share. Just because he's a little different.

So that was Friday. We rolled up on Monday, and within about 15 mins I was approached by a mum doing one of the courses, asking if she could use Luke as one of the children to observe. I agreed, as I know this mum has a soft spot for Luke, and is lovely with him. Not a problem.

Then about half an hour later, I was approached by another mum, who had read that I wanted to be asked first, and who is doing a course which requires her to observe a child with special needs and comment on the adaptions that Playcentre has made for him. Which from my point of view total 0- because he simply hasn't needed any. So again I agreed. This will involve her finding out about "Down syndrome kids"- first lesson done already! I know it's all education and that spreading the word is good, but when do I get to just enjoy my kid for who he is, without having to educate all the time?

Tomorrow we are off to our second session of the new clinic for Luke's therapy. The first week had its ups and downs, and that's about all I want to say. Some of it was great, and some not so much. So here's hoping for an improvement, because his last group was fabulous and the highlight of my week. 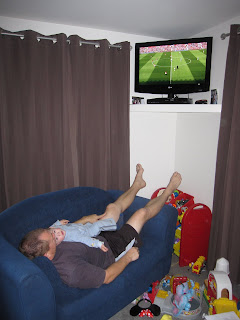 Luke and Neil watching the footy 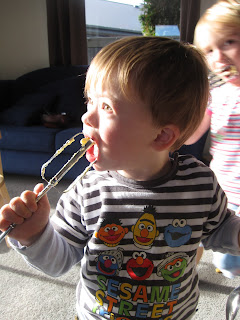 Licking the beaters for the first time ;) 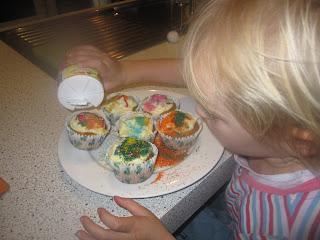 Can we fit any more sprinkles on those cupcakes?? 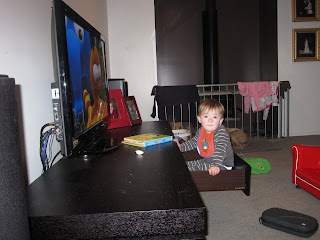 Didn't realise the drawer on the new cabinet was for storing small boys! 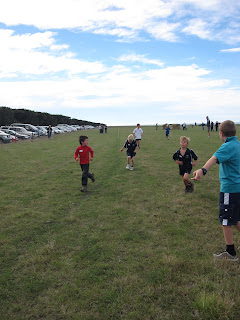 Ben finishing the Cross Country. He's in the middle in navy, looking down at his knee, which is bleeding. Apparently he and the horse jump did not see eye-to-eye. I am very proud of him for carrying on, even with the blood. A very brave boy.
Posted by Mel at 2:37 PM 4 comments: Links to this post