I got the call today, and the PDA has closed (as predicted) and the ASD is now classed as small (and is so small they haven't put a size on it, but we are going back for confirmation) which means that Luke WILL NEVER NEED HEART SURGERY!!!

Apparently the only thing he won't be able to do is go deep sea diving. I have always said that I will not put limits on what Luke can do, but I am happy with that one. The ocean is overrated!

I can't quite believe how lucky we are. I am very grateful and am over the moon, but I also feel for others who don't get the same good news we have.

There will be champagne corks popping here tonight!
Posted by Mel at 3:48 PM 5 comments: Links to this post

On Monday afternoon Luke is having an echo cardiogram to check his heart. He has not had one since the day after he was born. Then his PDA was still open, and he had an 8mm Atrial Septal Defect. Most doctors can't hear anything, but the new paediatrician reckons she can. I haven't met her yet- I was sick for the appointment, so Neil went with Luke instead. But I'm not overly keen on her from a couple of wee issues we have had. We shall see.

The best case scenario is that the holes will have spontaneously closed. Not likely, but it has been known to happen. You will hear me wherever you are if that is the case! Most likely is that is has shrunk, but is still there, or is the same size without causing any symptoms. That is okay too, and we will wait until he is old enough to have surgery via catheter instead of open heart surgery, which is a huge bonus. And I guess the worst case is that it has gotten worse, and he needs to have something done sooner.

So fingers crossed, and I will keep you posted.
Posted by Mel at 12:29 PM 2 comments: Links to this post 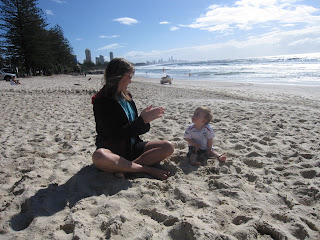 I have Aunty Kate well trained. 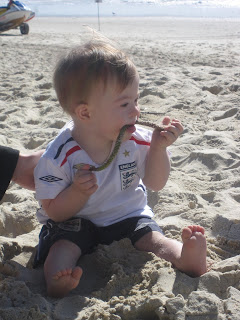 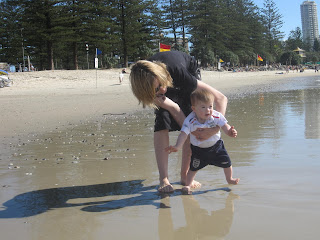 Someone forgot to tell Luke he can't walk yet! 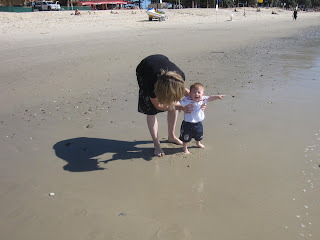 Hey Mum, check out the surf! 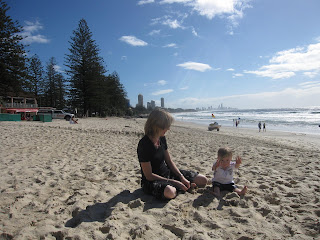 Mum and me making sand castles.

Luke and I were winging our way to Australia this time last week, for 5 days of much warmer, sunnier weather. We were going to my dad's wedding, and Neil stayed home to look after the big kids and keep up with the washing. As Luke and I were sitting on the beach last Sunday, I got a test from N to say that it was snowing at home! Ben has been looking forward to the snow since we moved here- it doesn't snow where we used to live, so that was pretty exciting and I was a bit disappointed to have missed it. Here are some photos of Luke sampling the beach (literally at times!). 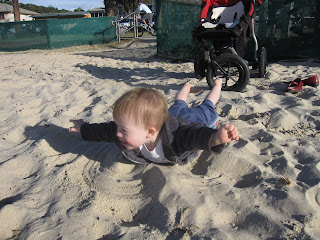 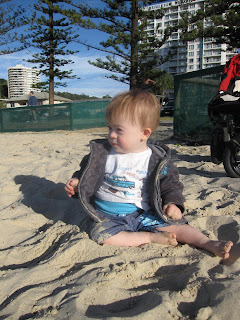 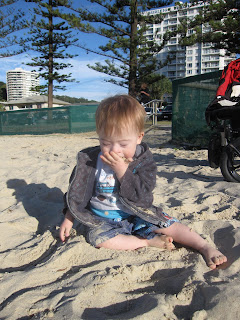 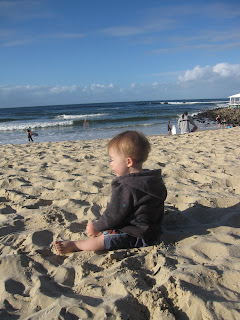 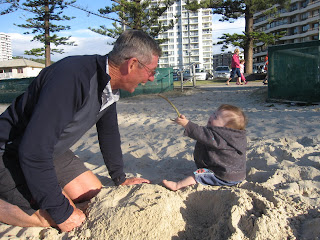