Where have we been?

Well, it's been a long time. Again. Hopeless.
There's been a lot happening in our lives of course. We are nearly at the end of the first term of the school year. I have had all 3 kids in swimming lessons all term, and have to get in the pool with Luke. Love that- especially when I am the only mum in there because he is just so much shorter. Can't they get a shallower pool?! 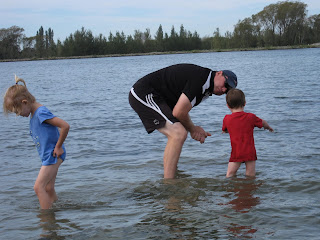 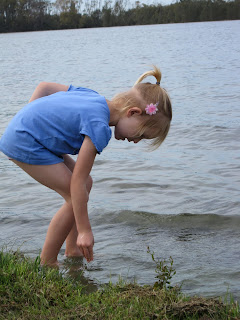 Emily has had 3 school visits, and turns 5 in a couple of weeks. She has to wait to start school though, because her birthday is the first day of the holidays. She has had some issues with the uniform too. I can't wait- one less problem in the morning. How can you be 4 and have trouble deciding what to put on every day? Also, how come she is surprised to see that the uniform top is jade green? Ben has been wearing the uniform every week day for 5 terms now, so surely she must have noticed at some point? Apparently not, because the very idea of trying on a top of THAT COLOUR caused a meltdown in the shop the other day.
Ben has had Rippa Rugby games for the past five weeks, and now Saturday soccer starts for the winter today. Luke is now not keen on sitting in the buggy for an entire game, (not that he was too keen on that last winter either), so I will have to chase him off the field repeatedly. He loves soccer, and I know he just wants to join in. Ben is also going through a Harry Potter phase, so often has a lightning bolt scar drawn across his forehead.

Luke is coming on in leaps and bounds. His latest sentence was a very clear "I love you". Although it was preceded by the name "Ella", who is the naughty dog. I'm pretty sure he didn't learn that sentence from her, so she is on half rations for stealing my thunder ;)

We have missed a couple of therapy sessions due to the Christchurch earthquake. I was teaching that day, and mum had Em and Luke in Christchurch with her, so once we realised the severity of the situation it was a nervous wait for an hour or so until we heard from them as the phone systems were down. They had been shopping and were in a pet shop looking at the fish, and mum said she was worried the tanks were going to fall down on them. Luckily they were on the east side of the city, where the damage was not too bad, and were able to bundle the kids into the car and out of town, straight home. Phew.

Some of Luke's therapists have lost their homes. Mum's place had very minor damage, but lots of the neighbour's homes are uninhabitable. We had Mum and Chris staying with us the first few nights as there were no services on, and then had my step-sister Kate and her partner Kerry visit, as well as Luke's friend Aidan's family overnight. All have suffered considerable damage to their homes, but luckily were unhurt. So things are beginning to return to normal, but the damage to their houses (in Kate and Kerry's case, a new house is needed) is going to take a long time to sort out, and there is a lot of uncertainty for them.

Luke is due to start kindy next month. He is entitled to some teacher aide support at Playcentre/kindy from when he turned 3, but this hasn't worked out and has been pretty stressful to sort out. The person organising it hasn't been very organised, so when I started asking last year was told it was too soon. But surprise surprise, when the term began back, two weeks after Luke's 3rd birthday, I still hadn't been contacted. Annoying. Then while I was waiting to hear back about when the meeting with the teacher aide and Playcentre etc was, I was working at a fundraiser for the Playcentre when a woman there announced to us all that she was going to be working at our centre with a little boy called Luke, starting from the Monday. I do not like surprises, and so poor Neil had to deal with that when I got home at 11.45 pm. Hopefully things are sorted now, and so when he starts kindy things will be in place.

I also became an aunty on my side of the family for the first time, with Samuel being born (my brother's son). Unfortunately they live in the UK so it will be a while before I get to meet him.

﻿ ﻿
I have also been closely following the journey of a friend I met through UpsideofDowns (not in person yet, but hopefully one day). Bridget often leaves lovely comments on my blog, and tells funny stories about her son Pete. Pete is 7, apparently very naughty- hard to believe as he has the face of an angel- and had DS. Pete has been battling leukaemia for several years, and was in remission at the end of last year. Unfortunately it has returned and he is in the fight of his life. He is one tough cookie, and so is his mum, so please spare them a thought. We have been so lucky with Luke's health so far. 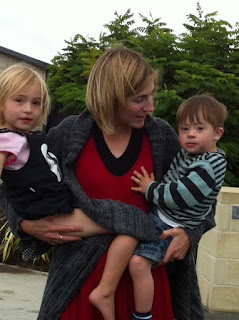 That is some update! RE: Emily and the uniform: it's one thing to see the jade green top on your older brother, it's quite another realising you (a Girl!) have to wear it too!!! I so understand her!

I am thinking of little Pete... so tough!

As for little Samuel, if you ever go and visit him on this side of the world, let me know: I am less than an hour's flight away form him, surely we could work something out to meet up! How cool would that be?

Wow, so much going on! I don't even know where to begin! The earthquake -- how terrifying! Glad to hear you're all safe. Swimming -- fun! School -- wow, Luke is growing up, I hope it goes well! New baby -- how fun to be an auntie, congrats! What else? I hope all goes well for you all...

Hi Mel,
So exciting to read a new update. I was beginning to think there was something wrong with my computer;)
Anyway, it was so cool reading everything. Boy did I laugh about Emily having a freak over the new school uniform. And I always love the bath photos with Luke.
And thanks for mentioning Pete. It's funny when you said that we haven't actually met, as it seems like we have really. Funny, eh?
Anyway, well done on the update. It was such a lovely surprise to see it :).
Take care,
Bridget

HI We met in the Burwood centre about 18 months ago I was over from France, visiting family.
My Son Nicholas has the Downs Syndrome , he is nearly 3. just had his tonsils & adenoids out too.. Nice to make contact .. I continue to battle on here in France.. regards Liz

Thanks for dropping in Liz- I think of you from time to time and wonder how you and Nicholas are getting on :) Great to hear you're doing ok.