Now We Are Five

Emily's last day of kindergarten was Friday the 15th of April. Her birthday was the next day, the first day of the holidays, so she has a bit of a wait before she starts school. 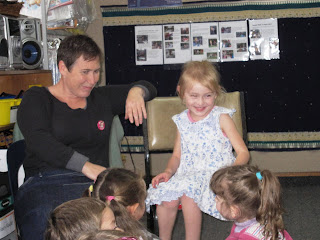 At Em's kindy they have a wee celebration for the children who are going off to school. (For those of you unfamiliar with the NZ system, Kindergarten here is for preschoolers from about ages 3-5. Ours still has the traditional sessions, with the littlest attending 3 sessions a week from 1.15 to 3.15 pm. The bigger kids attend up to 5 mornings a week, from 8.30am to 12.30pm.) 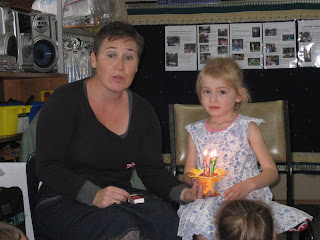 The birthday kid gets to choose their favourite book to share. Em chose Wonky Donkey, and they all sang along to the CD. They also choose their favourite learning story to share, and Em's was called Emily Creates. They make and decorate a playdough 'cake' and blow out the candles, and the child leaving gives the kindy a present if they choose. Em gave the kindy a Slinky Malinki book and some decorations for the kids to use with the hot glue gun. 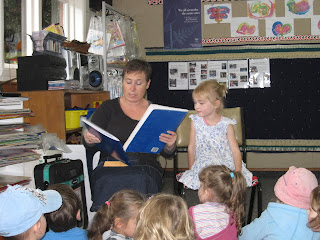 Then they sing Happy Birthday, and the birthday girl got to bring her profile books home to keep. 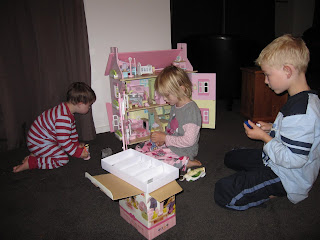 Saturday morning was the main event. Marked by present opening and some bad behaviour from the child concerned. 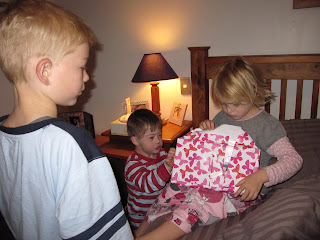 The brothers were very generous and even helpful. This did not improve her mood. 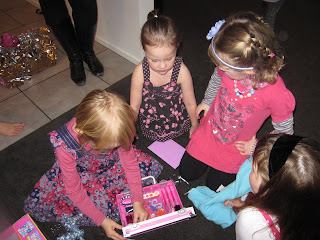 The friends arrived, and there was a lot of pink involved. 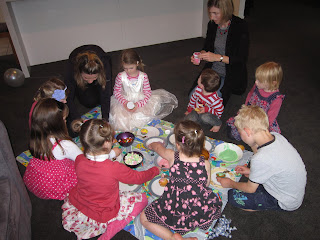 We were having a tea party, so we decorated cupcakes. I ended up making the icing with 6 little helpers, which wasn't in the plan, but ended safely. 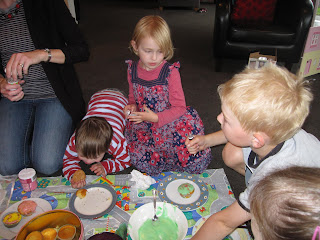 Even the boys were keen to have a go, just not using the pink icing. 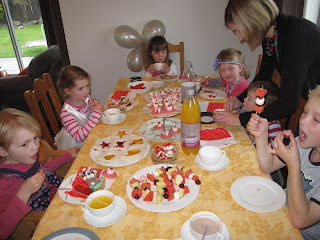 The food went down a treat, although some little girls had eyes larger than their stomachs, and some food evidently looked good, but was not fit for human consumption! 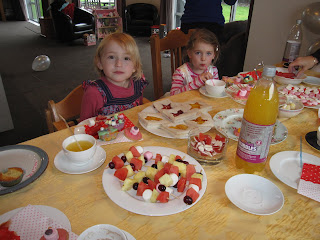 Emily caused a bit of a ruction by wanting to always sit next to one particular child who was wearing (in Em's opinion) the most beautiful dress. She's deep, my daughter. 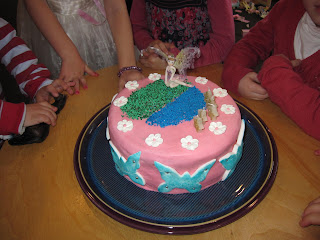 Then it was time for the cake. A lovely concoction created by the Daddy, who is obviously in touch with his feminine side ;) 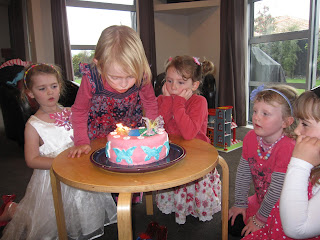 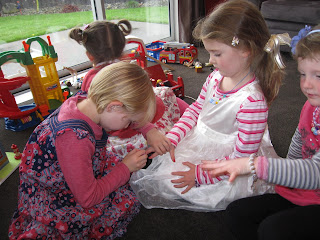 Then it was time for the nail polish and other girly activities. Notice the close proximity to THE DRESS. 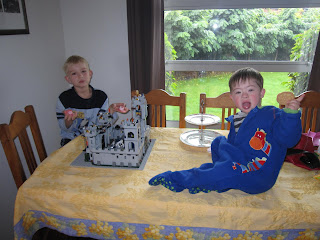 Later on the boys had some fun with man stuff. 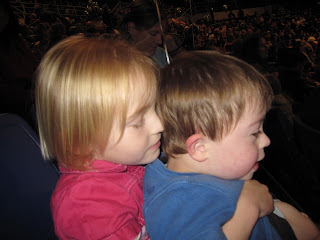 The next day we went to The Wiggles concert. Ben did not come, as he had informed me he was too old for that. He was not however too old to covet one of the helium balloons which came home with us. 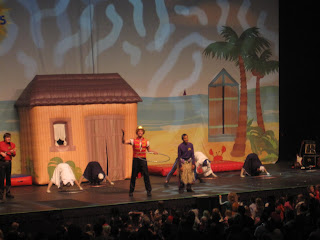 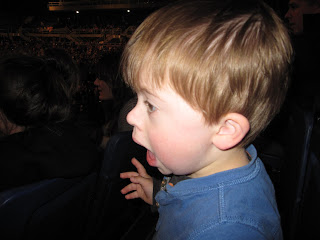 Luke loved it, and Emily, who is usually quite shy and attaches herself to my leg at such events, ended up dancing. 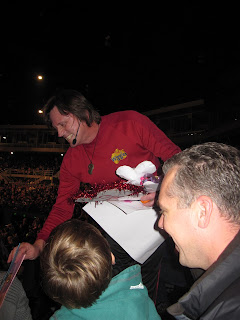 We even got to meet Murray, the red Wiggle.
So all in all a big weekend. Next stop is school- not sure this mummy is ready for that. I have a week off from being a kindy mum, and then Luke starts afternoons. They're all growing up too fast- which is not what I say when they're up in the night!
Posted by Mel at 9:13 AM

happy birthday to Em! looks like a very fun princess party :) glad you guys were alright in the earthquake - i am sorry to hear that some of luke's therapists have lost their homes. glad to hear the toilet training is going well... we have started a little bit with whitney but are moving to a new house this coming thursday so i think we will try a little bit more once we are settled in to the new house. have a great week!!!

Mel, I sure laughed about the birthday party. Emily sounds like such a character with fixating on the dress and all. And so funny about the boys avoiding the pink icing.
So glad that you all had such a great time at the Wiggles.
Hugs to you all,
Bridget and Pete

Happy birthday Em! Looks like an awesome party and a cool cake.
Wish I'd known you were going to the Wiggles, if you write to them they sometimes do "meet and greets" with children who have special needs. We were lucky enough to meet (briefly) and get a photo with them here in Palmerston North this week.

This all looks like gret fun. Em sure has her own ideas about what she likes! A true girl!

I hope that you Mel enjoyed it too.