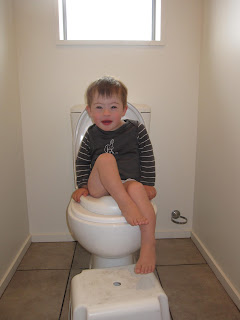 We have made a start. Luke has been happy to sit on the toilet for a while now, and occasionally did a wee. But seeing as it's summer, Neil is home on holiday, and Luke is nearly 3 I decided it was time to bite the bullet and go for it.

We started with putting him on the potty right before he got into the bath. This was mainly because he would often get in and wee right away. But I noticed that if I put him on the potty at any other time of day, he would try to get undressed first. Around that time I read another blog where a gorgeous wee boy was getting naked every time (very cute), as well as a mum of an adult with DS mention that she knows of a couple of adults with DS who do the same- the key for them being to make sure that the door is locked! So I decided on a change of plan. No more weeing in the nude before the bath, and we now just use the toilet. Start as we mean to go on.

Things have been going pretty well. We have just gone straight to undies and shorts, which means I have to do lots of loads of washing during the day. Today is day 5. So far Luke has progressed from wetting every few minutes (very tempting to go back into pull-ups) to much longer periods of time- up to an hour or so. He has gone from having no idea of when he is going or is wet to holding himself and sometimes coming to show us. Occasionally he has come and taken us to the toilet. He is definitely more aware of what is happening, because his pull-ups are so absorbent that he just had no idea. Having him in undies gives him that feedback.

We are also working on teaching him how to pull his pants up and down. This means occasionally he takes them off and appears without them, but we are getting there!

It would be easy to give up, but I am seeing progress, so for now we will keep going.

Health-wise Luke is well as it is summer, so fewer bugs and things about. He had been getting up anywhere from 5.45 to 6.15am, and that is not so popular when the whole family is on holiday. For Christmas one of his presents was a monkey sleep training clock, which my other kids got for the previous Christmas. He was rapt, and it is working pretty well. When Luke goes to bed we close the monkey's eyes, and the monkey wakes up at the time you set the alarm for. This is either quietly or it plays a jungle theme. Luke loves it and on the mornings he is up before the alarm, one of us goes and lies with him until the monkey wakes up. He definitely knows what's going on and looks at the clock expectantly until the monkey, or 'key' as he calls it, wakes up. Then he's up like a shot!

We had an appointment with the ENT before Christmas. I had requested an appointment just to check him out last winter as he was always full up and is a bit of a snorer at times. I know this is an issue for our kids. Neil looked at me when I was going on about it, thinking that he wasn't that bad, but I was determined to get to see and ENT, so a little exaggeration wasn't going to hurt. Luke also failed his hearing test earlier in the year, but his ears are full of wax.  How anyone can hear properly like that is beyond me. So I finally got my appointment, and went along with Luke and Emily in tow. The doctor (not a talkative one) looked in his throat and ears. I told him about the hearing test (luckily I had taken the letter from the audiologist with me) and then announced he needed tonsils out (huge and blocking 3/4 of his throat), adenoids out (didn't look but could tell they are big by Luke's breathing sounds), and he will clear out his ears and insert grommets if needed. Apparently he has so much wax in there that it would hurt to even put the instrument in properly to look.

This took all of 5 minutes. I was speechless, which takes some doing. I couldn't even think of any sensible questions to ask. So we are now waiting for an appointment for the op. I am really cross when I think of all the times I have taken him to the GP with a cold and they look in his ears and tell me he's fine or that he has one ear blocked with wax, but they think he's fine. Turns out, he's not. I will be saying something the next time I am in there. Luckily there is one doctor at our practice (not our GP but I can make an appointment to see him instead) who had a sister with a different trisomy, so has an interest in kids with DS who will be a bit better at handling these kind of things.

Emily's cast comes off on Wednesday, which will be great for her. It's not much of a summer when you can't get around very well and have to wear a cover swimming.

Luke turns 3 in 3 more sleeps. Can't quite believe it. He will start afternoon kindergarten in Term 2, at the same time as Emily starts school. They are growing up so fast.
Posted by Mel at 7:50 AM

We're right there with you on the potty training! I'm not brave enough for undies. I bought some thick traing pants for now.

That's all so awesome. Congratulations on the toilet training! He is doing fantastically.
Glad to hear that Luke is staying healthy and that you got some results at the ENT. Hope Luke has a great birthday!
Good to hear that Emily's cast is coming off too. Need lots of swimming in the recent heat!
Enjoy the rest of the holidays!