Luke has been keen on having a go on the trike outside with the kids, but has no idea what to do with the pedals. He can stick his feet on them, but the idea of pushing with one foot, then the other is crazy as far as he's concerned. Which means I have to push him. Fun.
So on Upside of Down ( NZ online community for parents of children with special needs, and in particular DS) recently, there has been an ongoing discussion about our kids and bikes, and what is successful and what has not. One mum had seen one of these bikes and raved about how well her daughter did on it, even though she is not yet walking. There are lots of two wheeled runner bikes on the market, but apparently (don't quote me on it!) this is the only one with three wheels, is the lowest to the ground to begin with, and converts into a 2 wheel running bike, as well as having the ability to adjust the seat height by moving turning the bike frame up the other way, as well as moving the seat up and down.
I was a little sceptical at first, as they are quite a lot more expensive than the standard two-wheel type, but seeing as several parents raved about them I took Luke into the shop in Christchurch to have a look. He can ride a ride-on, but has never really steered it properly. He tended to lift the front to steer, and not turn the wheel. So I put him on it in the shop, and he was away! Mum and I told him to turn the handle bars to turn a corner, and I couldn't believe it when he did! 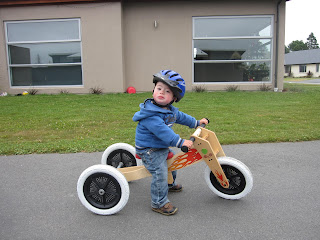 ﻿So this is the result. It was going to be for Christmas, but seeing as I have no self-control, plus the weather has been so lovely, he has had it for 3 weeks already, and he absolutely LOVES it. So do the others, but they get kicked off it by me! 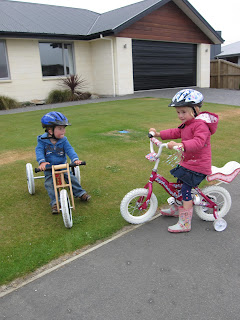 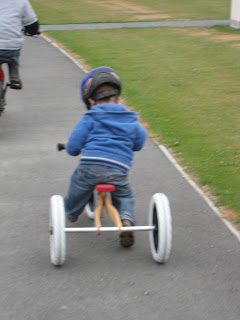 The bike looks awesome, I haven't seen one before. I bet Luke is loving it!

love luke's new bike and so happy he loves it too - hope his ear appt went well this week :)

The speed of him! This looks really great. I wouldn't have waited until Christmas either...

Born to be wild I say!!! What a speed demon you are Luke - I don't think I am going to let Todd see your Mother's video clips in case he gets any ideas with his wishbone bike (which is in the box until his birthday on Thursday!). Trina

That looks fabulous! Luke did sooo well on it. We have a very expensive tricycle that I get to push Goldie around on. Even with the toe clips she isn't able to peddle yet. That bike looks like it is helping him develop strength in his legs compared to just being pushed around. Must find one for her b-day in March!

Do they do them in big sizes? Could do with one myself. We have oppositeland weather from you guys right now. More snow than we've ever known. A third wheel might do the trick. Luke is looking like Boss Hogg on it. Will have to get more details from you. Maybe Jacob will be looking for one from Santa next year. Happy Christmas to all in Christchurch. Hope Santa's overloaded! xx

Hey, Mel! I've been missing you in bloggy land. Hope everything's ok and that you've just been busy with holiday stuff. Check in when you can and Happy New Year!