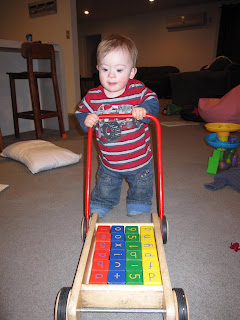 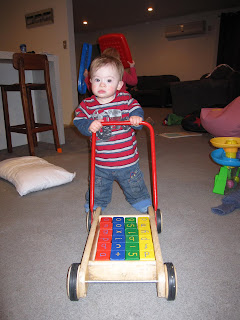 I posted about what Luke was able to do at age 18 months a little while ago, and I mentioned that he could push a trolley across the living rooms. So here he is. He started by pushing a ride on as it was lower and he didn't have the strength to stand up for very long. Then when we were away, he used other people's ride ons which were all different heights. When he was getting confident with that, I turned them around and had him push from a more upright position, with his hands on the steering wheel to push instead of the seat. We were only away for a week, and by the time we got back he was strong enough to pull himself up at the trolley and push it along all by himself. Yay!