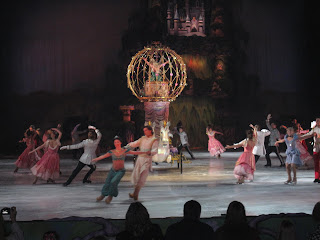 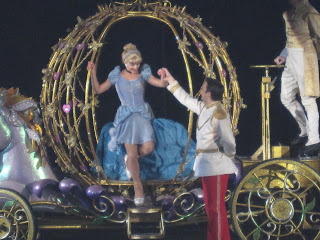 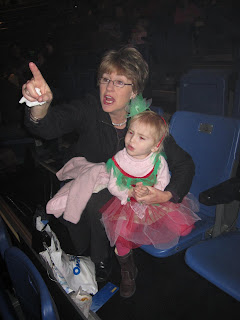 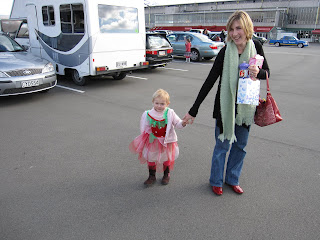 After the show, in glamorous strawberry fairy dress, but made less glamorous by boring mother who insisted on boots and polar neck for warmth in winter!


Back in June, Mum and I took Emily to Christchurch to see Disney's Princesses on Ice show. And it was the most amazing show I have ever been too. Emily is quite shy at times, especially in new situations, and wouldn't go near poor mum for the first half. That all ended at half time, as she deigned to go with her Nana to choose a princess doll to take home. Little madam!

The show was just outstanding. We had good tickets, not in the first row, where the audience got to interact with the characters a little, but in the next row which was set further back. Em would have been totally freaked out by them coming too close to her! The costumes were excellent, the set was fabulous, and the whole show was magical. There was one scene from Sleeping Beauty where the dragon is chasing the prince, and they set fire to the ice. It was spectacular. Em took that all in her stride, but the poor little girl next to me was literally screaming and climbing onto her grandad, begging to go home. Two seconds later however, and she was laughing her head off, so all's well that ends well.

If Disney come back next year, we will definitely be going again, and I would totally recommend it to anyone with little girls, or who once was a little girl themselves. Emily says it is not for boys, and was busy reporting any rogue boys she spied to me! (I think this was mainly as she got to come without her brothers, as I am sure Ben would have loved it, even with all the little girls dressed up in their fairy or princess costumes!)
I also need to mention Sarah, whose blog I follow, who goes every year with her mom, and say that I did think of you both, and isn't it funny how this blogging thing works when you are half a world away, and have never met!
Posted by Mel at 8:15 AM

Oh how exciting!!! You went to Disney on Ice. One of my favorite things to do.