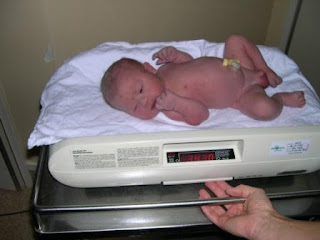 Luke when he was brand new. 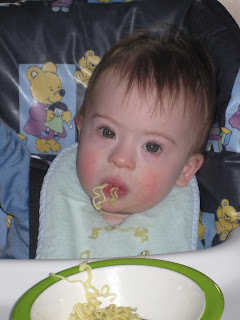 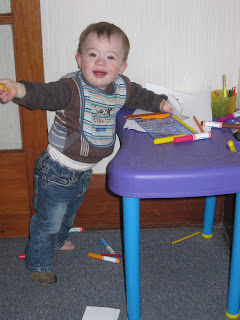 Yesterday, Luke was 18 months old. And how cute he is. He is progressing rapidly at the moment, despite another cold which has gone to his throat. So now old ladies say "Gosh, he's chesty isn't he? You should take him to the doctor- he needs antibiotics." However, I have had him to the doctor a million times already, and his chest is clear, it is just phlegm in his throat, and sounds like Darth Vader when he breathes at times, but IT IS NOT A CHEST INFECTION!!!!Anyway, that rant aside...

Luke is now pulling himself to stand, and cruising along the furniture. He is able to ride his rocking horse, and lean over to carefully fall off when he is finished. (I put him on it.) He attempts to move his ride on, but has limited success. He can make great car noises when he is on it though! He can walk pushing his block trolley. He can pull himself up in the kitchen to interfere with the microwave. He pulls himself up at the toilet (ewwwww!) but is not yet able to reach the toilet paper (yay!) to unravel and eat it. Paper is one of his favourite foods.

Communication wise, he is doing well too. He signs several words, such as bird, duck, fish, finished. He says many more, including no (of course!), hello daddy, I did it, I got it, and many more. He says 'star' and twinkles his fingers to request a rendition of his current fav, Twinkle Twinkle Little Star. His previous favourite Row Row Row Your Boat has been surpassed for this now. He loves to dance, and his signature move is the "Stevie Wonder", where he lies on his tummy with his arms out to the side, and weaves his head from side to side, just like the man himself.

He is a real boy, and loves playing with cars and especially with his brother and sister. This became especially apparent when mum had Ben and Emily for a couple of nights last week to give us a break. Luke, who is renowned for his easy-going and independent nature, was grizzly and had to be entertained. Turns out he is not as cruisey as I thought- he was bored, used to the constant stimulation from the others!

It has been a busy 18 months for us, and there have been a lot of changes, and some grief too. But all in all, Luke is a total joy, and we would not be without him.

Ah Luke was such a little tiny baby. And now he is getting so big and cute.

He's a 3rd child like Goldie, they hate to be left alone! That is great that he is talking so much!

I am delighted he is doing so well. Standing up and trying to walk, and talking and singing!

And well done to you Mel, all the time you spend with him is showing off.

Well done Luke, now all you need to do is come over to Ireland and teach Cathal some of those signs and teach him how to stand.

Looking good in those photos!!!!